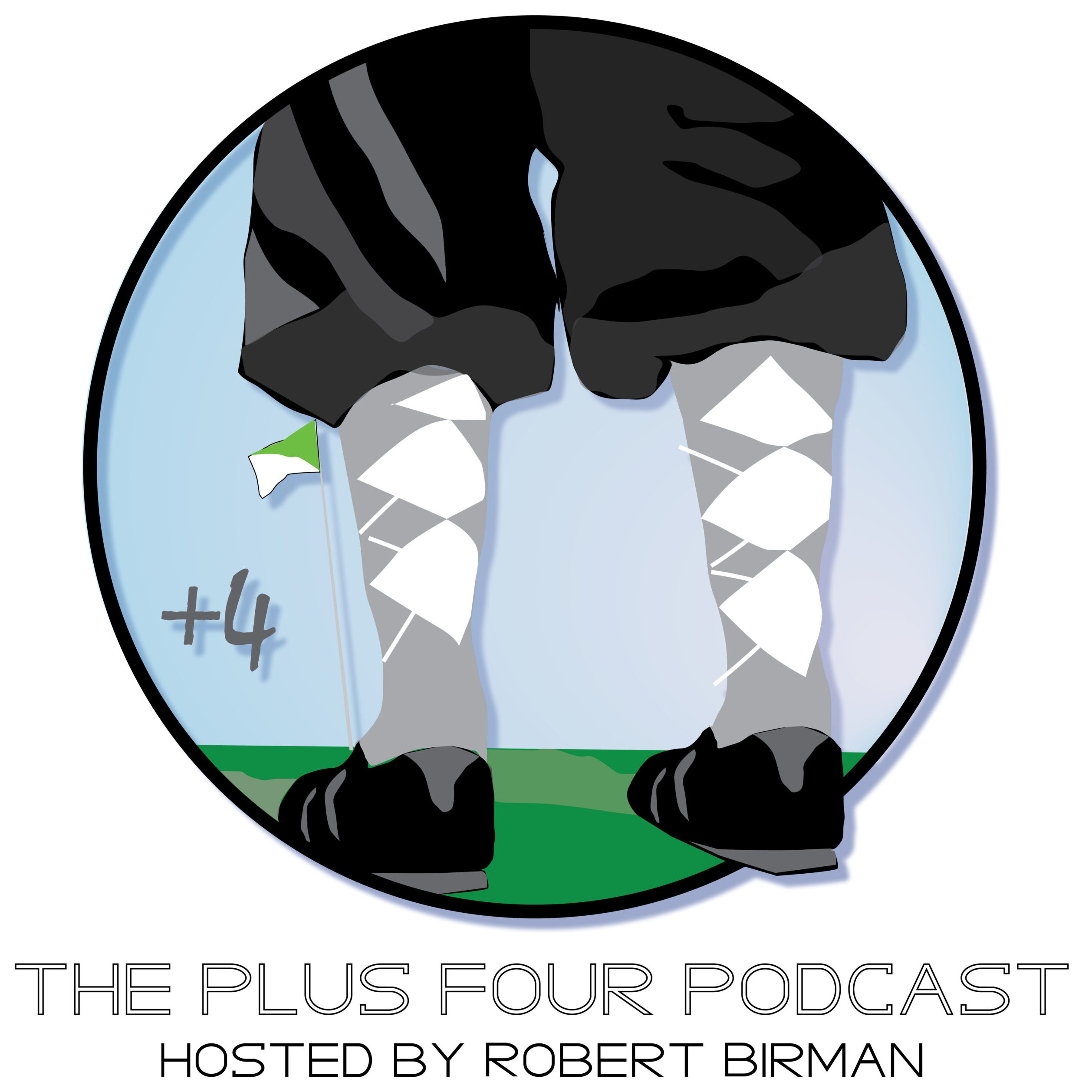 Plus Four Podcast
Tad Moore, Rob Ahlschwede, Roger Hill, and the origins of the Society of Hickory Golfers

We’ve heard about B.C. and B.C.E., but what about B.S? “Before the Society!” What was the world like before the formation of the Society of Hickory Golfers? We thought we’d sit with some of the early influencers who helped create the SoHG to hear from them—first hand—what led to the motivation to start a formal society, how it all came to pass, who we’ve lost since then, and how they regard the evolution of the sport and its membership more than 20 years later.

The ultimate outcome? It’s what we all know – we play this sport for the social connections and relationships formed as a result of meeting like-minded stewards of the traditions of the game. In this podcast, you’ll get a sense of the years of commitment and camaraderie that led to the formation of the SoHG. These three representatives share their insights and their personal touchpoints with the game in a wide-ranging conversation. With any luck, it’ll inspire new players to join us too, and experience the game as it was meant to be played.

Since 1963, Tad Moore has been designing custom golf clubs for the most discriminating amateur and professional golfers in the world. Tad is recognized in the golf industry as one of today’s premier club designers. Tad was born in 1941 in Toledo, Ohio to a golfing family. Tad’s parents, Thad and Hazel Moore were avid golfers along with his older brother, Bill. Tad’s mother and brother saw to it that Tad learned the game and Tad won the Sylvania Club Championship in 1972, 1975 and 1977 with his exceptional putting. Tad has been active in hickory golf for many years and was a founding member of the Society of Hickory Golfers. Today this group is the most influential group in hickory golf. Tad has won many hickory championships across the USA and is a respected authority on equipment and the game. Tad is currently on the executive committee of the SoHG and hosts the Southern Hickory Four Ball golf tournament every spring. Tad’s golf club designs are distinguished by their classic and timeless shape. Tad has used the Professional Tours around the world to test his club designs. At one time Tad had over 72 of the finest players using his putters on Tour. In 1991, Ian Woosnam won the coveted Masters Tournament with one of Tad’s putters. Tad has also produced a driver that Sean Fister used to win the Remax World Long Drive Championship in 2002. In 2005, Tad introduced his innovative line of hickory-shafted golf clubs that today are very popular among hickory golfers across the globe. These were the first NEW hickory shafted clubs to be produced in the USA since the early 1930’s. Tad’s hickory club designs are patterned after the successful designs of MacGregor and William Gibson, two of the most popular brands of the vintage era. Prior to Tad’s becoming totally involved in golf club design Tad designed and manufactured the shaft seals that were use on the axles of the Lunar Rover that landed on the Moon!

Rob Ahlschwede is an International player with extensive knowledge of all aspects of hickory golf who first joined the Golf Collectors Society in 1984. Rob was a founding member of the Society of Hickory Golfers as well as co-founder of the Northwest Hickory Players. He has served as a board member of the GCS and the Society of Hickory Golfers, where he is the Equipment Chairperson. Rob has won numerous hickory golf events including the Championship flight of the Tad Moore Southern Hickory Four Ball on three occasions. An expert at hickory golf club repair, Rob is often sought out for equipment questions of all kinds. Rob has not played with modern clubs since 1999 and has inspired numerous players to play hickory golf. When asked about his proudest accomplishment, Rob stated, “There are many. But my work in Omaha helping grow the game there, hosting several tournaments/events through the years.” “And now, living here in the Pacific Northwest, finding a few like minded players and founding the Northwest Hickory Players. We are a great bunch, now bringing over 100 players to hickory in the northwest, hosting three major events each year–the Gearhart Hickory Classic, Pacific Northwest HickoryChampionship and the Gamble Sands Hickory Championship. This past season two of the three qualified to allow players to earn points toward the Championship series.” “Also, being asked to be the chair of the Equipment Committee for the Society has been highly rewarding and has enabled me to communicate with many in the hickory world, both newbies and old timers!!” When asked for advice on assembling a quality hickory set, Rob had this to say, “Make it fun!! Know that it will be a bit of an adjustment until you find the right equipment.” “Putting together a quality hickory golf set takes a while. From the beginning of the SoHG, replica clubs were an important part of this process as it is not always easy to put together a set of original/antique wood shafted clubs to play with.” “Finding really good equipment that matches one’s game takes time; having authentic replica clubs is an important avenue for new hickory players so that they can easily find clubs to play. Then a search for quality originals can be undertaken if desired.” “And today, many hickory players have multiple sets with a mix of original and replica clubs to maximize enjoyment of this great game.”

If you had asked Roger Hill in his late thirties what sport he enjoyed, he would have said hockey, tennis, cross-country skiing, and fly-fishing. He would not have mentioned golf. His involvement in that game came as he neared forty, and grew to become an abiding passion and pursuit. As often happens, it was Roger’s work that connected him to the sport. As the owner of a commercial photography studio, many of his clients were furniture manufacturers. One of these clients booked Roger and his assistant at the time, Ralph Livingston III, to travel with him to the Furniture Market in High Point, NC. The client was an avid golfer and it didn’t take long for him to convince both Roger and Ralph to try their hand at the game. Neither played golf at the time, and the long road home to Michigan was lined with golf courses. The two photographers became “keen” on the sport. Nearly every night after they finished their work they played as many holes as the setting sun would allow. Fate intervened when Roger’s wife Chris gave him three hickory clubs for their anniversary. She had intended that they be hung in the den; instead, Roger took them to the photo studio for “show and tell.” Roger and Ralph were off! Ralph first explored the Dayton trade show, returning with enthusiastic excitement. Then, after a trip to the Ypsilanti GCS national show, both were hooked on collecting and playing with hickories. Roger joined the Golf Collectors Society and later, the British Golf Collectors Society. By 1990, he was playing hickories in earnest and began traveling to events around the United States. He won his first Stableford in 1997 at the BGCS Open Meeting at Western Gailes. Roger also finished strong in a number of hickory events including three consecutive Musselburgh Foursome championships, a 2nd and a 3rd place net in the Scottish Hickory Championship, and a number of other high finishes in GCS and US Hickory events. During the 1990’s Roger became a board member and eventually, President of the Golf Collectors Society. During this time, competition in hickory golf grew immensely. After unsuccessful attempts to gain the attention of the GCS concerning the need to structure and guide this growth, Roger helped found the Society of Hickory Golfers during the annual GCS meeting held in Virginia Beach in 2000. Roger served as the SoHG’s Membership Secretary for nearly 10 years. In recent years, Roger has travelled extensively to play in SoHG and GCS events, and has participated in all ten of the Hickory Grail events to date. During the beautiful Michigan summers, Roger organizes regular competitive hickory events for the devoted membership of the Michigan Hickory Tour, which he founded in 2016. The group fondly calls him the “Commissioner.” He maintains a membership at Thousand Oaks Golf Cub in Grand Rapids, and for many years was a member at Machrihanish Golf Course in Scotland. Roger lives in Grand Rapids, Michigan with Chris, his wife of 45 years, and their two cats, Young Willie and Margaux. He is happily retired from his commercial photography business, Photosphere Studio. Roger is co-author of George Nicoll of Leven with Peter Georgiady, Airlie Hall Press Kernerville, NC Copyright 2003.

Bios from the Nebraska Hickory Golf Hall of Fame

To see Northwest Hickory Players’ write-up on our visit to the Dick Estey collection, click here.